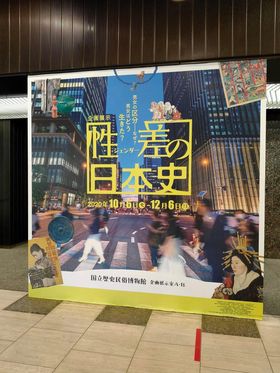 Even though it was a weekday on a Friday, many people were present at the special exhibition, which reminded me of the impact of this project.

I felt it was a very effective educational program to show how gender differences have been created through the history of Japan from ancient times to the present day.

With panels and exhibits that are worthwhile to read, the exhibition introduces the history of Japan from ancient times, when there was no difference in the power structure and women were heads of community, to the process by which men came to be in charge through wars, to the view of discrimination against women brought about by Buddhism, and how modernization eliminated the role of women from public sphere.

【Permanent and Temporary Exhibitions】
If you are planning to visit the museum, I think you can spend at least two hours just to see this special exhibition. If you want to see the permanent exhibits, the National Museum of Japanese History has a huge permanent collection that you might need more than one day to see.

【What Modernization Brought Us】
Personally, I enjoyed the exhibition on the modernization of Japan since the Meiji era.

In the history of sex trafficking, as Japan was modernizing, the international community criticized brothels as human trafficking, and in 1872, the Geisha and Prostitute Liberation Ordinance was issued, which turned Geisha into prostitutes and allowed them to sell their sex at will, removing the element of human trafficking. With this decree, the Meiji government presented Japanese society as a member of the modern nation rather than a barbaric one in the midst of a growing international movement for human rights. However, not only did the actual prostitutes continue to sell their sexuality in other ways under the supervision of a debtor, but the pretense of “free willed self-trafficking” transformed them from being seen as “poor victims of trafficking” to “objects of contempt who sell their bodies of their own free will”.

This change seemed to be similar to the Equal Employment Opportunity Act of 1985. At first glance, this law, intended to show that Japanese society was posing to promote gender equality due to changes in international conditions, made it seem that men and women were equal in employment. However, behind the scenes, the Temporary Staffing Law was amended and many women became part-time employees and disposable laborers. Then, the conventional view that women were working hard in the midst of discrimination became the mainstream of the neoliberalism and the ability-based view that women are non-regular because they don’t work hard.

One of the characteristics of modernization is the neoliberalism, which is guided by the right to self-selection and self-determination and is guided by self-responsibility.

【Possibilities for Change from History】
This is only a small part of the exhibition, which depicts the changing gender and institutions in Japan’s history from various angles, making it a very effective educational exhibit. On the contrary, I was surprised that this kind of exhibition had never been held before.

At the end of the exhibit, there was a video message from the organizers that was very nice and I would like to share a few things with you. One of the purposes of this exhibition was to teach the younger generation that the current state of society and their own roles in it are irresistible and irreversible, and that by learning about history, they should understand that the current state of things is not natural and can be changed. Of course, individual action is needed to change, but the message that we should not give up just because it is the norm was a very convincing and powerful message after seeing how the role of women continues to change in the vast expanse of Japanese history.

This special exhibition will be on display at the National Museum of Japanese History in Chiba until December 6.