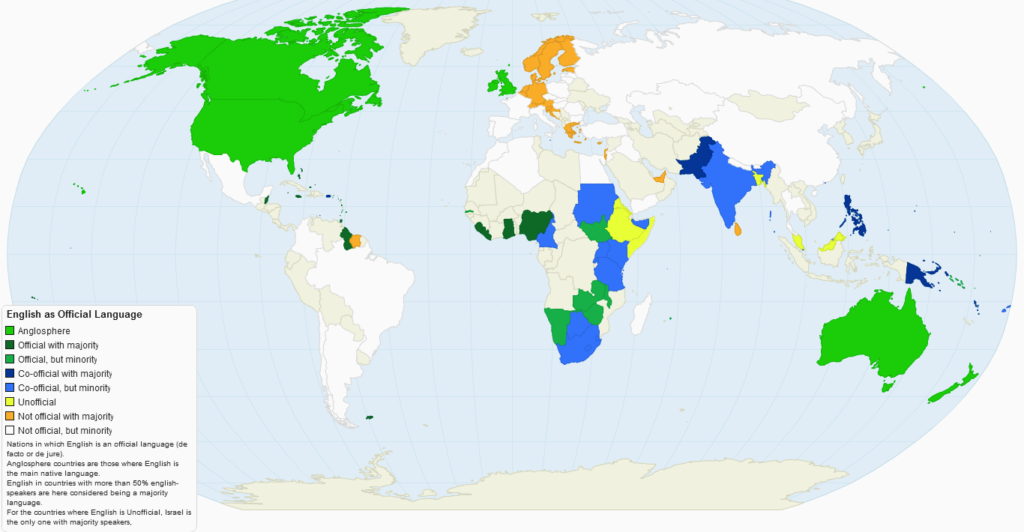 Frankly, I don’t like speaking English particularly in Temple University Japan Campus (hereafter TUJ) and Japan. Whenever some Japanese or non-Japanese people in uni kindly told me that I speak English well, I had mixed feelings. Some culturally Japanese people say: “Though you have ‘an (heavy) accent’, you speak English naturally.” or “Ah you have a British accent.” Both comments show how Japanese people think of “American English” as a standard accent like standard Japanese. It sometimes freaked me out because it’s like other accents are not good enough. Some culturally non-Japanese people go: “Wowww, your English is really good!” or “Oh do you mean —Rrr? (when I say words with r – e.g. girRRl)” I often got awkward with the former overreacting comment, feeling like I’m a baby or pet. For the latter comment, I often got so upset with people mimicking me, repeating what I said in their way or asking me to repeat again and again. As I’m aware I make so many mistakes when speaking English, I haven’t got over those comments completely yet. However, I got better at dealing with my insecurities thanks to a friend whom I regularly chat with. So, I decided to share some of our conversations which helped me view my English differently.

First of all, I’d like to share my thoughts on Japan’s Americanisation and TUJ. I struggled to understand what Japan’s English language textbooks’ CDs were saying when I went to middle school and high school because they were limited to Northern American accents. Unsurprisingly, some of my friends told me that it is difficult for them to understand what their British English language teachers are saying in their universities. It shows how Japanese people are oriented to learn American English rather than other accents. In addition, I sometimes got lower marks on English tests because I didn’t use “-ize” instead of “-ise” or eliminate “u” like colo“u”r. One teacher told me that because this is Japan where American English is the standard, I should follow its grammar and spelling anyway. Another thing I found strange is that people always talk about their “TOEIC” or “TOEFL” scores, but they never talk about “IELTS” which is run by British Council, DP: IELTS Australia and Cambridge Assessment English. TOEIC and TOEFL is, on the other hand, run by EST headquartered in the US. So, in my opinion, Japan is quite Americanised in terms of its English language education.

As for TUJ, Japanese students at TUJ seem to me to be keen on American culture and politics as it is an American university based in Tokyo. Despite their interests, some of them do not overcome their stereotypes on non-Japanese people, maybe due to the relatively large proportion of Japanese students compared to universities physically in the US. Meanwhile, I think since non-Japanese people do not necessarily immerse themselves into the Japanese society as much as international students in Japanese universities, some of them can maintain stereotypes on Japanese people like Japanese people do to foreigners. Naturally, each group of people get together, and it is less likely that they interact with different groups of people. I sometimes heard that Japanese and non-Japanese groups are so divided even though this is an “international” school. That’s true, but I think it is the result of both sides’ passiveness of expecting the other one to adapt to their own culture and to take action. I’m not super super interested in American culture, but I like listening to and talking to interesting people regardless of their cultures so I don’t feel I belong to either the Japanese student community or the non-Japanese student community in uni. Believe it or not, I had been seriously worried about this for a whole, but I ended up being peripheral in uni and stopped overthinking about it because I have some good friends and esteemed professors.

I think my friend, who I met in a class, is quite good at listening to people, asking them questions and helping them realise what they are actually struggling with. She already knew that I was super insecure about my English as I often told her that “I speak English a bit weirdly” to defend myself. So, in the beginning of our chats, she often asks me about my life in New Zealand and how I have learned English there. Let’s be honest, I wasn’t comfortable with her questions, which required me to recall some traumas regarding my English. Though, looking back, she helped me trace the causes for my insecurities and reexamine and question those memories from a bird’s-eye view. For instance, I absorbed an image that Kikokushijo/returnee people from the US are superstars in my middle school, and I started to view my English as strange. Knowing the causes of my anxiety over English, I’m now able to avoid psychologically beating myself up and to challenge my negative thoughts when I get upset about it. As I have been able not to be stuck in the downward spiral, I feel like I’m a bit free from the curse I put on myself. What is more, one of my arbitrary assumptions on her I’m really sorry for is that I had thought that she had no struggle with English whatsoever before she said that she’s taking online English language classes for further improvement. It made me realise how we can’t actually understand others unless we talk with them in depth. Put simply, however others think of me is not a whole picture of myself at all so it’s just wasteful and meaningless worrying about their comments. Since then, I have been able to hear others’ judgements without letting them keep dictating my feelings. Additionally, making assumptions about others means that I also see myself based on categories I acquired from the Japanese society. So, we need to train ourselves to be as open-minded as possible to be free from our unconscious expectations on others and, by extension, ourselves.

Another thing I found interesting was that my friend said that she thought I’m good at understanding any accent unlike her struggling with British accents, and that I’m also good at pronouncing l and r. Meanwhile, I was a bit jealous of her being able to speak English like an American without any grammatical errors. And then, she said that she’s aware of her grammatical errors or miscommunications. So, I noticed which part of English skills people focus on totally depends on individuals and their ideal images. I had been obsessed with evaluating my English skills only in terms of oral fluency and grammar. I feel I was particularly paranoid of that in my first some semesters in uni as it put an heavy emphasis on speaking up in class as participation. However, her comment helped me step back and rethink my English skills in various elements, especially my listening skill which I hadn’t got to think about and seen as great. And, knowing that everyone has their own struggles, I felt like I’m not alone more vividly and felt embarrassed with myself being self-centred. Furthermore, while talking with her, I noticed that she does not do things I don’t like, and even if we have any assumption on each other, we can talk about it safely, clarify them and learn new parts of each other. I don’t need to try hard to get along with people I don’t feel safe or comfortable with. I’ve learned that being polite and respectful is important in both Japan and New Zealand. However, I guess I created a perfectionist image of being polite and respectful, which eventually hurt myself since I want to appear to be a kind person to everyone. Instead, I should remind myself that I have the authority to choose who I want to get along with, and that I don’t need to try hard to be friends with people I can’t be myself and feel comfortable with.

To sum up, I might still feel down due to my insecurities over English at times, but now I myself know who I am, and my English is part of who I am. That’s enough in the end. I just need to try to chat with good friends more and understand them better rather than craving others’ understanding of myself. And, if someone makes judgements on me, that simply means s/he is suffering from her/his own standards. I don’t want to be sorry for not fitting their assumptions on me but want to let go of them and to be just myself. At the same time, it’s also unhealthy blaming myself for being negative on my languages because it means I set a standard on myself. Rather, I should grow up at my own pace and compare between old and new myself. That said, getting upset because of my English skills and being aware of the worthlessness of others’ judgements are who I am, and that’s okay. I’ll just keep speaking English in my way regardless as a part of my activism to challenge people’s standards on English.