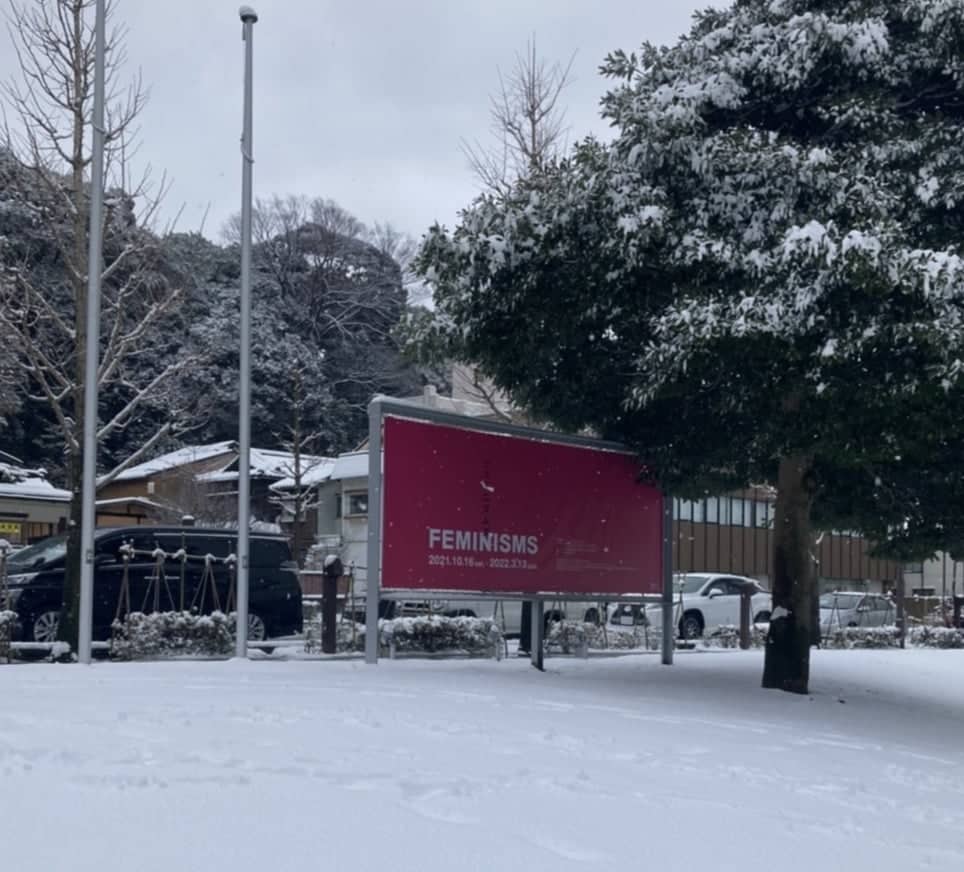 I went to the “Feminisms Exhibition” currently being held at the 21st Century Museum of Contemporary Art in Kanazawa.
It was a good time to think about feminisms (plural) in snowy Kanazawa.
At the same time as the Feminisms exhibition, another special exhibition, “Countermeasures Against Awkward Discourses: From the Perspective of Third Wave Feminism,” was also being held.
I was thrilled to see these two special exhibitions on the theme of feminism being held in a public art museum. In 2020, I went to see “Gender in Japanese History” at the National Museum of Japanese History in Chiba. I was very happy to see that gender and feminism are now the focus of an exhibition, and I took a train for three hours from Tokyo to Kanazawa to see the exhibition.

Unlike the Japanese History of Gender Differences exhibition, the Feminisms exhibition looks at feminism from the perspective of art. The Japanese History of Gender Differences was a grand historical exhibition that looked at historical objects and the accompanying changes in the concept of gender from the Jomon period to the present day. The Feminisms exhibition, on the other hand, was mostly a display of contemporary art created by multiple artists from the perspective of feminism, and the viewer was asked to decipher the art.
I personally found it more difficult to decipher the works in the exhibition ” Countermeasures Against Awkward Discourses: From the Perspective of Third Wave Feminism” than in the Feminisms exhibition, since the guest curator Yurie Nagashima collected works based on the theme of reinterpreting art of the 1990s from the perspective of the third wave of feminism. Although there is a pamphlet with detailed explanations, there are many works that at first glance make you wonder, “What is feminism?” On the other hand, I could see a strong sense of individual and agency rather than solidarity that was a characteristic of third-wave feminism. In particular, there were many works that were neither “feminist” nor created with “feminist art” in mind, but had agency in their expression, or questioned patriarchal and gender norms.

The Feminisms exhibition, on the other hand, was very “straightforward,” with various artists expressing their own feminism (hence the plural, I guess) in their works. I personally found the work “Shadow of a coin” to be particularly interesting. In this work, several round embroidery pieces are hung from the ceiling and their shadows appear on the walls of the exhibition room, and in the embroidery, there are images of women doing housework and saying no to stigma. I was very interested in this work, which depicts women’s work (shadow work) that is not paid, using embroidery, which has been considered “women’s work,” as its subject.

Another work by Minako Nishiyama, based on the motif of “tere kura,” depicted how “femininity” and “eroticism” were both depicted in the color pink, and how it was used in the context of consuming women. You can listen to the voice of a man who was attracted to the pink ad and called.

There were many other artists expressing their own feminism in their art.
It was snowing unusually hard on the day of the exhibition, and I barely managed to get to the exhibition on our feet, but I had a worthwhile time.
Both exhibitions will be held at the 21st Century Museum of Contemporary Art in Kanazawa until March 13.