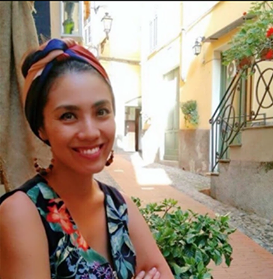 I am Megumi Mori, 42 years old, from Tokyo, Japan. Raised by a single mother, married twice internationally, and divorced twice, I now live with my mother and three animals. I enjoy Netflix, eating, listening to music, and strength training.

–What countries have you lived in?

When I was in college I worked three part-time jobs and went to Florida for two months to study language for the first time, and by the time I was 26 I had been living in Edinburgh, Scotland for two years with my fiancé. I worked as a nursery school teacher there for a year or so, but the commute to work became a challenge, so I worked in a Japanese restaurant in Edinburgh. That was probably the time when I struggled with money the most. I put a post-it in my wallet and lived on £10 for the week. But it was fun, I learned a lot. Then I got married again and went to Italy, where I lived for three or four years.

–When did you first become interested in gender issues?

I know from my own experience that Japan is a country where people think that being a man is valuable. But I’m past the point where I’m angry, and I’ve become like, “Well, that is the way you have raised to sit on the train with your legs spread.” In the Edo period, people in this country had a sense of value that if a son was born, he was better than his mother, so I feel like that’s still going on. There are things that a man is allowed to do just because he is a man.

–So, in that male-dominated world, have you ever had a bad experience as a woman?

There’s a lot of mansplaining, if it’s a small thing. It’s like when I’m talking and the guy says something, everyone listens to him. When I was in college, the thing I remember most is being asked by a boy in my class, “Ms. Mori, what do you eat for breakfast? How do you live? Why are you like that that?” He asked me after I gave my opinion about gender. ‘What’s that question?’ I thought. I remember taking feminism in college or something, and I remember talking about it, and I was treated like an alien.

The other thing I remember is when I was a manager in a talent agency in my twenties, I was still naïve. I worked with a producer and a staff member of celebrities, and I was very sexually objectified. But at the time I thought I didn’t even have a voice, and I couldn’t help but smile, and when I look back on it now I still regret it. There were times when people would talk about how women in the South were strong, or they would put us in categories.

— how have you dealt with the difficulties and struggles related to such gender inequality?

I was a strong-minded kid, and I think I said what I had to say. It wasn’t to the point where I was trying to make something right in my opinion, but I was like, “Why do you say that?” I think I always spoke up for myself.

–what helped you to think about gender issues?

I once read a book called “Possessing the Secret of Joy” by Alice Walker. It’s about the removal of female genitalia. I was shocked to read it when I was in college, and I was surprised that women had to experience this kind of pain because we are a woman. It made me realize that if I was to live as a woman, I had to be prepared for it. That’s what women are treated somewhere. When I thought that what I was being subjected to was no big deal, but when I thought that I might have been the girl who had her genitals cut out, I felt that we were of that nature. And I thought, even though there are layers of places and the earth, we are all connected in a conscious way, and the fact that a woman of my age was experiencing this somewhere in Africa was very relatable.

I think the image of men and women in Japan is very clear, and I think that still men are always the provider and women are always the protector. I think it’s a sad thing that many Japanese men are favour of girls who are a little bit stupider and more childish than they are, like AKB, where a guy in his 50s would sexualize a teenage girl, take her pictures, and then spend millions of dollars on it. I’m unusual for a Japanese woman in that way. I’m not afraid to speak my mind, or speak more than one language. I have a female friend who graduated from Keio University, and she said that most men don’t contact me when I tell them I’m from Keio University, and I think it’s sad that men pull back because they think they can’t win a smart woman. So I like myself for being able to say my opinion without fear of controversy. As for “feminine”… I don’t know about “feminine”… (laughs) I think the ideal society is one where you can be yourself and be admired for it, and I want to embrace who I am. I like me who wears a lot of makeup and dresses up, who is lazy, and who speaks up sexual desire. I want more women to know that it’s okay to speak up and it’s okay to be yourself. So, I guess, I have to show it first.

–what is your definition of success in your work or life?

I don’t think I cannot be happy all the time at work, but it would be nice if the positive feelings outweighed the negative. It’s good if you feel like you’re helping others, if you feel positive every day, if you feel like you’re contributing to as many people as possible, and if you have a sense of mission. I hope that what I am doing helps someone else. I’m an English teacher, so it would be nice if the students take the lesson and they are praised at work, and they have a good experience, and they feel good about themselves, and then they go home and be kind to their families.

— do you have a very important mentor or someone who is an influence?

My mother has only recently learned the word “feminism” and she told me she is asexual (i.e. I have no romantic or sexual feelings for others). She runs a beauty salon because she believes that a society in which women are beautiful is a strong society. She wants to help women to get their confidence. She has been doing this for 40 and 50 years for women. I think she’s a genuine feminist. I’ve seen her leave her violent husband when I was two or three years old, and she’s moved on with her baby, and I’ve seen her life, and I think it’s natural for women to work hard. I thought I could live with my skills without relying on a man’s salary, and for me, that’s English. I think if I want to do anything, I can do it.

— do you consider yourself a feminist?

I think I am a person who wants to keep up with feminism. The definition of a feminist doesn’t mean that women are superior to men, but rather that men and women are equal in many ways, and that’s what I’m trying to achieve in our society. That’s the kind of person I want to be. If the definition of feminism is changing with the times, I want to keep up with the changing definition and understand it and be a feminist.

–What are your plans for the future?
a. Your plan

I want to find a partner. It would be nice to have a partner who has the same values and stimulates each other intellectually and in many ways.

b. Hope for society
I hope we can eliminate the barrier between men and women more. I think it would be great if we could live in a world where it doesn’t matter who you are, what your abilities are, what your appearance is, what your name is, and what your gender is. It’s not about having 30% or more women in management positions, because it doesn’t make any change just increase the number of women. I think it would be great if more people weren’t afraid to show what they are like. I think it’s a blessing to be yourself, open up, and I hope that more and more people just embrace who you are.