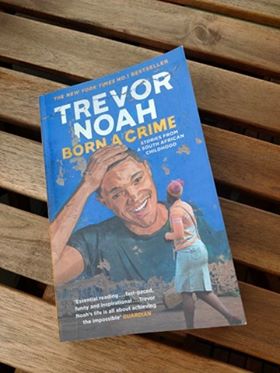 I remember the shock when I first seen Trevor Noah’s standup comedy on Netflix. He amusingly depicts the absurdity of the North-South problem. (*the problem of the economic disparity between developed and developing countries) At the same time, I was shocked to realize the differences in “laughter” between Japan and America.

I think it’s nonsense to write how funny Trevor’s show is, so I urge you to watch his performance.
https://www.youtube.com/watch?v=c80MS6AUcJ8
If you’re a Netflix member, you can watch it with Japanese subtitles, you can watch “Trevor Noah: I am Patricia’s Son” to get a better idea of his style.

Now, about the difference between Japanese and American comedy, Japanese comedy is “laughing at the difference”. I think it’s often the case that laughing at people’s appearance, body shape, sexuality and racial differences in Japanese comedy. Many comedians create their performance based on the idea that different from “normal” is funny. Therefore, they make fun of people who are different from the norm. I feel uncomfortable when I see comedy on TV and that might hurt someone different.

There is an interesting story when Ariana Grande came to Japan. She was on Japanese TV show and met Japanese female comedian, Haruna Kondo, who make fun of herself by telling at the analogy of her face resembling that of an older man. She is early 30s and in Japanese TV show everyone laughs when she tells them that “I am not Michel Moore!!” So, when she met Ariana, she said to her that “I am not Shrek!” in Japanese. Ariana Grande did not laugh at all. Thinking she didn’t understand, Kondo now told her in English, “I am not Shrek.” Then, Ariana said, “I didn’t think you are, I think you are very nice, Kawaii.” The incident revealed how Japanese comedy work. Kondo, a young woman, resembles an older man in her appearance is laughable. I think Ariana’s statement was great and we should not make fun or create comedy based on the differences of people’s appearances.

Unfortunately, laughing at the appearance of female comedians is an everyday occurrence. The same can be seen of Morisanchu’s sumo jokes and Harisenbon’s “Shinigami” jokes. I don’t blame these women for making jokes about their appearance. It’s probably the only way to make a career out of doing so. But I think it’s important to note that some people feel uncomfortable to see the composition of female comedians doing self-deprecating stories and the audience laughing at them. These days, It’s nice to see more and more female comedians suggesting that such comedy is “old-fashioned”. While it’s encouraging to know that laughing at someone’s appearance is not funny from someone like Ariana Grande, but we should raise our voices from inside of Japanese society that we are not comfortable by judging our appearances. Personally, I like Barbie, Japanese female comedian. She sends out messages of “I am beautiful even if I am not the normal standard of beauty”.
It’s not just laughing at someone for being “ugly” that’s dangerous. Complimenting a woman at work or at a bar is also make people uncomfortable. You might think, “Well, it’s a compliment, so why not?” but judging the appearance of others in public places is to believe that you have the right to sort others into “beautiful/not beautiful” categories. It is always safe to not mention others appearances in public.

Trevor Noah’s autobiography, “Born a Crime,” includes interesting episode of gender perspective that Trevor was made aware of when he meets a beautiful woman.
‘Born a Crime’ depicts Trevor’s childhood in apartheid-era South Africa. It depicts unreasonable social background and the heterogeneity of Trevor, whose mother is black and father is white, are written in an amusing way. This book is a very interesting piece of work. Overall, the issues of race, poverty, and the teachings of a mother with a strong faith are hilarious. I encourage you to read the entire book as it is illustrated with episodes.
Here’s one gender episode that I personally found interesting.
When Trevor was in high school, a dance party was to be held at his school. At the time, Trevor was making money by making pirated CDs and selling them at school. One day, his friend told Trevor that if he gave him lots of good music for free, he would introduce Trevor the most beautiful woman for the dance party. Trevor was skeptical, but he was introduced to a wonderfully beautiful and shy woman named Babiki. The two meet several times with friends and develop a relationship.
Trevor borrows a BMW from his father-in-law and gets some nice clothes for the dance party. But on the day, his drunken father-in-law couldn’t lend him the BMW he’d promised Trevor. An annoyed Trevor runs around looking for a car and is far too late to pick Babiki up. With an angry girlfriend next to him, an impatient Trevor takes a further wrong turn and is two hours late for the dance party.
When Trevor said, “Let’s go inside,” Babiki was angry, and no matter what he said, she just said “No,” and wouldn’t get out of the car. Trevor’s friend, who went to persuade her, came back and said to Trevor surprised him. He said “She can’t speak English.”
It was only then that Trevor realized that he hadn’t spoken a word to her.” She had only responded with “Hi.” “Bye.” “Yes.” “No.” Trevor was flattered by the fact that he could go out with beautiful girl and he did not realize that she didn’t speak English at all.
Caught up in the “beautiful” thing, Trevor felt bad to her. He thought ‘This is no different to looking at a naked woman on the computer screen.’ He did not talk to her because he didn’t even know what a girlfriend was, and if he talked to her, he’d ruin the mood. He is ashamed of himself for thinking, ‘I’m the one who caused her to not want to get out of the car.’
Every episode has Trevor’s realizations and learnings from his boyhood, but in this episode, he learnt women are not just beautiful objects. The episode is very interesting. It is a unique episode of South Africa where many people speak many languages. In Japan, it may be difficult to have that kind of experience. On the other hand, it is sometimes difficult to realize that you are trapped by your appearance because you can have a conversation. Regardless of whether you’re male or female, there are certain types of people who have a “favorite looks,” especially there are strong standard of beauty that you see on TV and in magazines. That powerful messages of “standard of beauty” easily imprint that you want to be “beautiful” or you want to have a “beautiful” partner. I don’t think that’s a “bad thing” to be influenced by the media, but we should have awareness that when you impose those standards on others, it’s not just a matter of judging them as objects, but it’s a matter of hurting them.